Home » Confessions of the Real Me

Confessions of the Real Me. just a series on my blog where i share the not so perfect bits and pieces of my life. because in reality…our lives are not always the perfect pictures that we share on social media channels. i know mine isn’t….but i’ll take it.

The time my house almost burned down

when i woke up yesterday and turned on the news, images of the Colby fire filled my television screen. but before I knew this footage was of a fire burning in Glendora, my heart skipped a beat. this could have very well been images of fire in Anaheim Hills…where i live.

as a resident of Anaheim Hills, fires are known here all too well. we have had several fires near our home since we've moved into our home ten years ago, that's what you get when you live near hills with dry brush. the most significant fire was the Freeway Complex Fire in November 2008. we actually came close to loosing our home in this fire. and since i have never shared about that day here, i thought i'd share about it now.

it all began in that November morning, we smelt fire blowing in from Chino. the neighbors and i were in our backyard trying to see where it was. we could see houses across the freeway in Yorba Linda on fire. i had a weird feeling that there was a big possibility our home could become threatened by this fire.

the wind was STRONG…..blowing directly towards us.

i knew this was not a good sign, especially since the fire wasn't contained at all. if the fire jumped the freeway, my home would be in it's path.

my hubby and i decided to pack up some of the necessities just in case. we went around the house and grabbed the safe with the important documents in it, unplugged and packed up the computer, and grabbed keepsakes and photos off the walls. we put everything by the front door in a bunch of laundry baskets. we also pulled out the cars and parked them facing out so we could leave as quickly as possible if need be.

we continued to watch news, and everything seemed to be on fire across the way. my uncle called around 2:30 and said the fire had hopped the freeway.

we started to receive phone calls asking us how things were going. i was talking with my friend, when the doorbell starting ringing.

that was it, i knew it was time. the fire was coming.

when i answered the door, it was my neighbor.  he said "COME OUTSIDE AND LOOK!"  i actually wasn't prepared for what i saw. 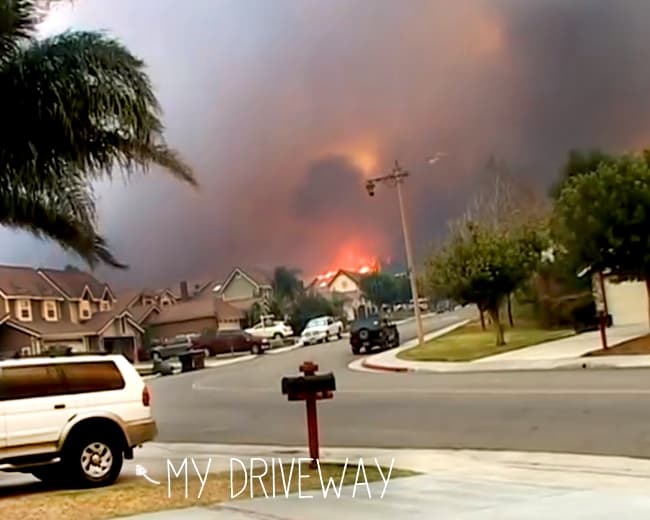 the sky was black and glowing flames surrounded our house on all four sides. the flames actually looked as if they were hovering over our house. it wasn't like this just 30 minutes prior. the three palm trees in our front yard seemed like they could catch on fire at any moment. cars were fleeing the neighborhood. the situation was tense.

it was time to leave.

at this time, my boys were five and two years old, and they didn't understand what was happing. they were crying. everyone was running around shoving stuff in cars. and my other neighbor's son, who lived in the apartments that back up to my house, drove up yelling at us to get out. his house had just burned down and the fire was almost here.

as my husband and i loaded up the car with the items we had prepared, i buckled in my crying boys. they wanted my to get their fish. but there was no time for that. i looked over at my husband and saw tears in his eyes. he was scared. scared for the boys and our safety.

i ran in the house one last time to see if i should get anything else. i tripped and sliced my arm open as i broke a picture frame. blood was streaming down my arm. that was it.

we didn't NEED anything else. it was okay…if the fire took our house, i would be okay. 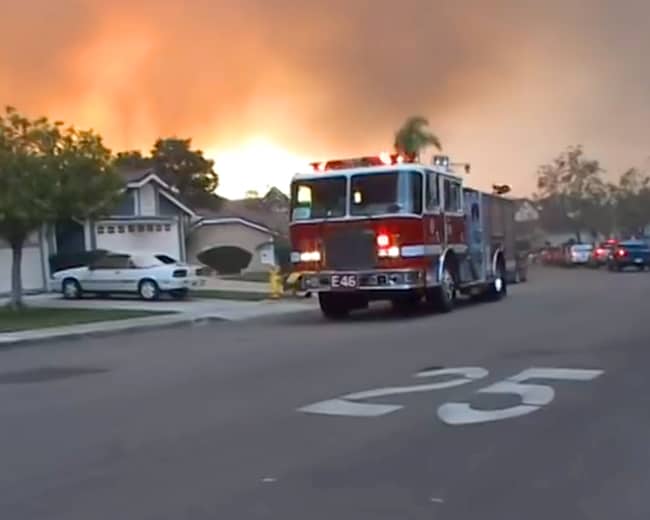 as we drove out of our neighborhood, all i was thinking was…get me out of here. firetrucks didn't even arrive until the last moments we were there. you would be surprised at how many cars and how fast traffic can build up.

it took us a while to get out of harms way, we had to drive on the wrong side of the street just to get out. fire flanked our neighborhood on all four sides. i felt that for sure, that would be the last time we saw our house standing. there was that much fire.

but at that moment…..

I WAS AT PEACE.

i had my family, i had some sentimental items and i was out of harms way.

here is video footage my neighbor one door down took in our front yards of the fire. it was pretty scary, and it doesn't even show the flames to the left of us. at minute 2:20, the video moves to my front yard. we have the house with the White SUV.

luckily, our house was spared. thanks to the firemen and some neighbors who refused to evacuate, our house did not burn. we came home to a yard scattered with fire extinguishers and the fence between our neighbors house and ours was charred and burned. whenever a burning ember came close, those neighbors doused them out with the hose. and someone took guard on our swingset, hosing down our backyard with water. we were so grateful.

the reason why i wanted to share this experience with you now, is because this year, with my word being FOCUS, i have been focusing on family…making sure we are prepared for a disaster. food storage and emergency plans are important for any family. i almost cried when i heard a reporter on television ask a man if he had thought about what he would do if the fire approached his home. the man said he never even thought about it.

how scary is that!

i just want to make a point of how important it is to have a plan for your family in the case of an emergency. i know first-hand that things get crazy and  scary when a disaster strikes. your mind can go blank when you are scared. i would have never imagined all the traffic in our neighborhood during the fires. our kids need to know where to go if they get separated from you, and having a family plan for all disaster scenarios is very important.

there are many resources online and pages you can print-out and fill-out with information you would need in the case of an emergency. there are also ideas of what you can pack in emergency kits and carryout bags. in the upcoming weeks, i will be sharing with you some of the ways i have prepared my family for a disaster.

you never know when it will happen to you.