here is the giant building, Fiesta Floats, where some of the floats are housed and being prepared to go down the parade route on New Year's Day. 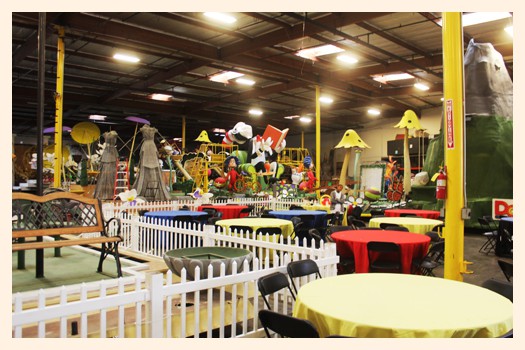 we were so excited to work on the Dole float. 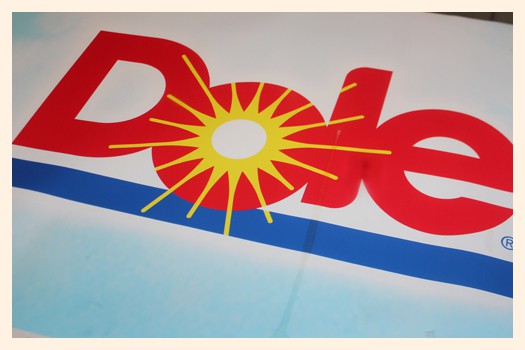 Dole's float, "Dreaming of Paradise," was designed by Raul Rodriguez, an award-winning float designer who designed last year's float and 7 other floats this year. he told us that he got the inspiration of Dole's float from his parrot Sabastian. it also follows in the tradition of Dole’s two Sweepstakes Trophy winning predecessors of showcasing the regions where Dole employs workers and grows produce. 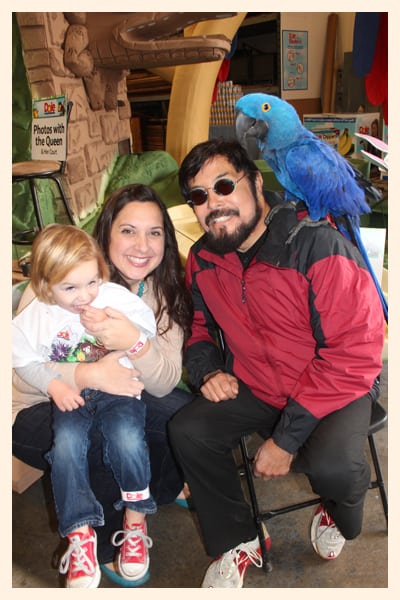 there is a lot of preparation that goes into getting the parade float from this beautiful drawing to being ready to drive along the parade route. 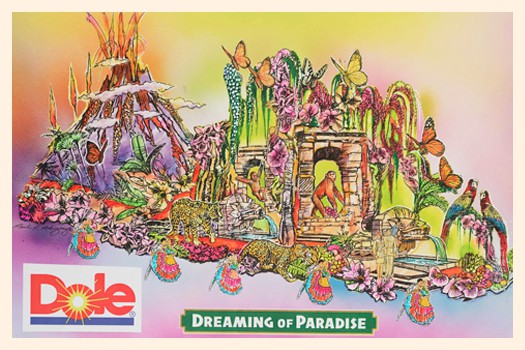 the DOLE Rose Parade Float will have a 26-foot massive volcano which will erupt with smoke, steam and fire shooting 20 feet into the sky over a vibrant and lush tropical rain forest of Latin America teaming with prowling tigers, fluttering butterflies, chimpanzees, parrots, and dragonflies. 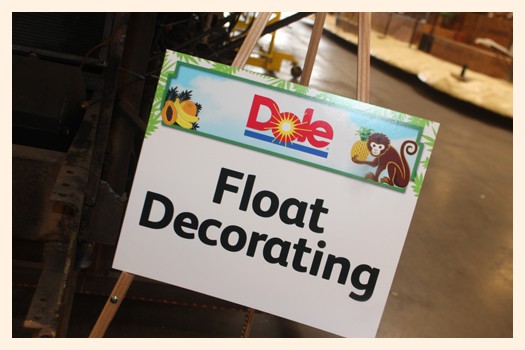 nested in the lush backdrop of tropical flowers and foliage two magnificent parrots will be perched on lofty branches of orchids. whimsical chimpanzees will demand our attention as they frolic near magnificent waterfalls cascading down plush moss covered walls accentuating the mist-draped gardens. exotic animated leopards will bask in the beauty of the jungle that claims the lost ruins of past civilizations. 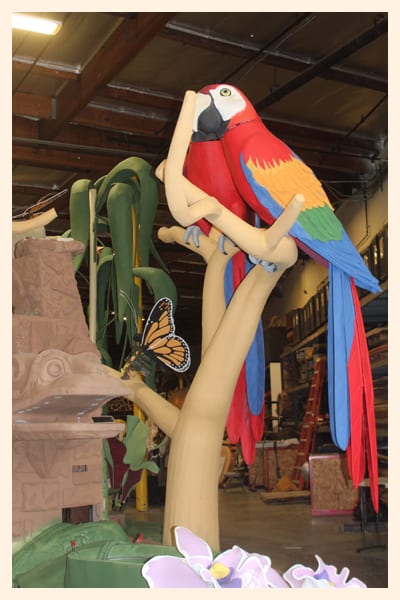 it's so amazing how you can take simple dried ingredients like rice, grains and dried herbs... 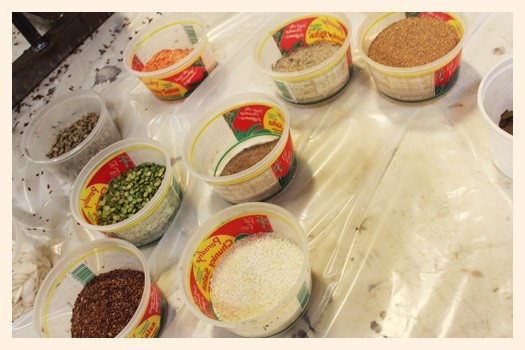 and turn them into an amazing monkey like this! 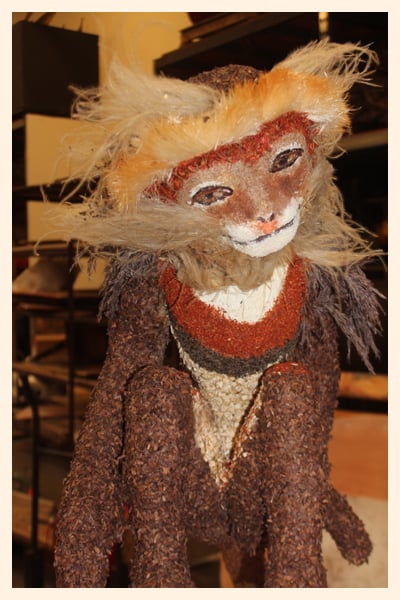 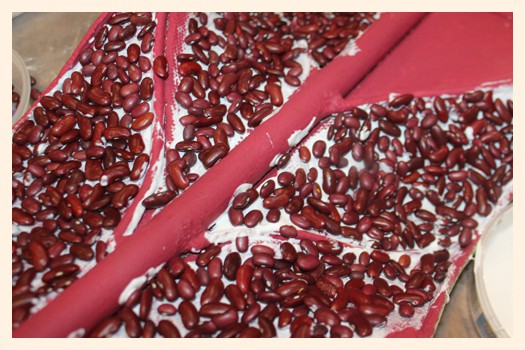 they can't wait to see the float when it is finished. 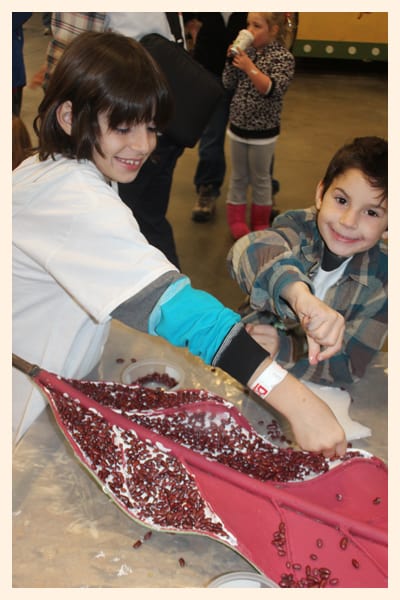 being over 55 feet long, 18 feet wide and over 26 feet tall, it's going to take a lot of flowers and seeds to cover this massive float. when finished, it will feature three waterfalls with over 1,000 gallons of cascading recycled water as well as a misting system add to the tropical mood. 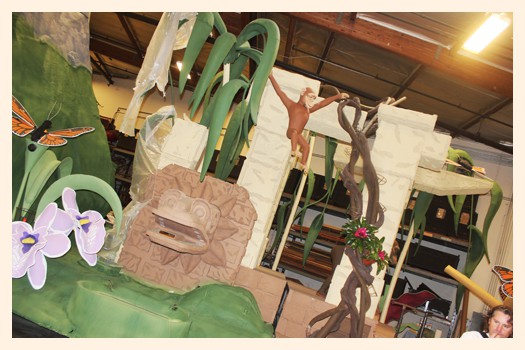 throughout the float there will be fresh and healthy fruits, including bananas, pineapples, mangoes, papayas, peaches, strawberries and blueberries that were grown by DOLE. 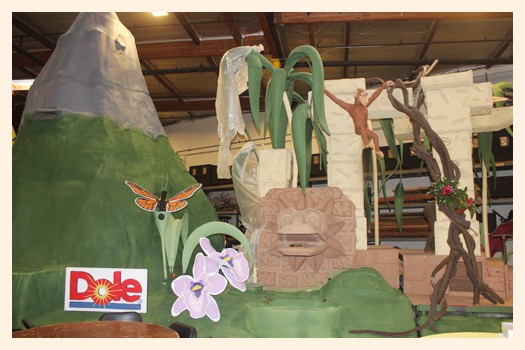 my boys were thrilled to learn about the process of float making and see the behind the scenes work that goes into making the Tournament of Roses Parade spectacular. it was also awesome to share this experience with Dole. 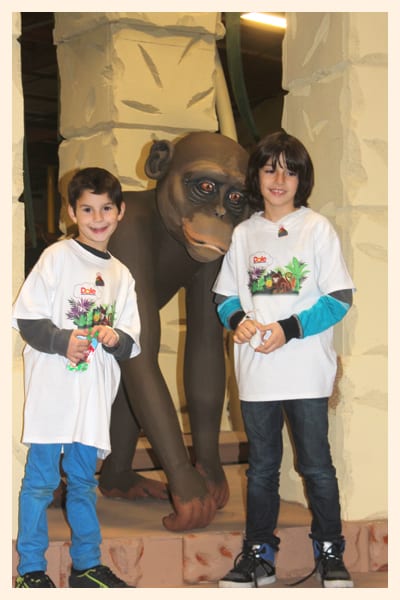 DOLE works with thousands of independent family farmers from around the world. the “Dreaming of Paradise” float pays tribute to the beauty and bounty of the tropical paradise of Latin America. It also reminds us that with responsible, sustainable growing and operating practices we can keep the dream of paradise alive. 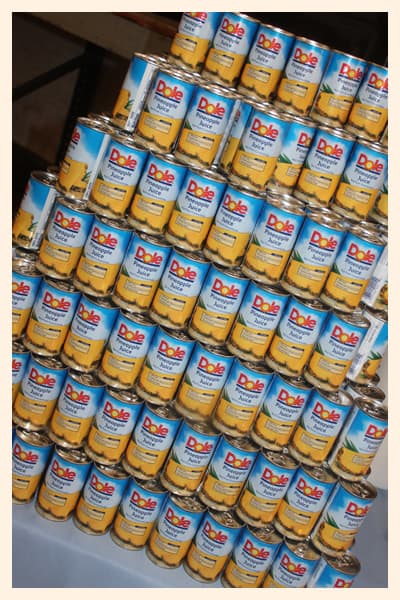 at DOLE, healthy living includes not only eating well and exercising, but treating our people, resources, environment and community as our most precious assets. Dole's mission is to provide great tasting, all natural, healthy fruit and vegetables, as well as make the world a better place to live both today and in the future.

lastly, here is a picture of me, and bloggers, Mary, Jennifer, Jamie and Erin with the Tournament of Roses Court.

good luck Dole!  thank you for having us.

here is a video of me and Dave Spare of Dole Foods explaining a little about the float.