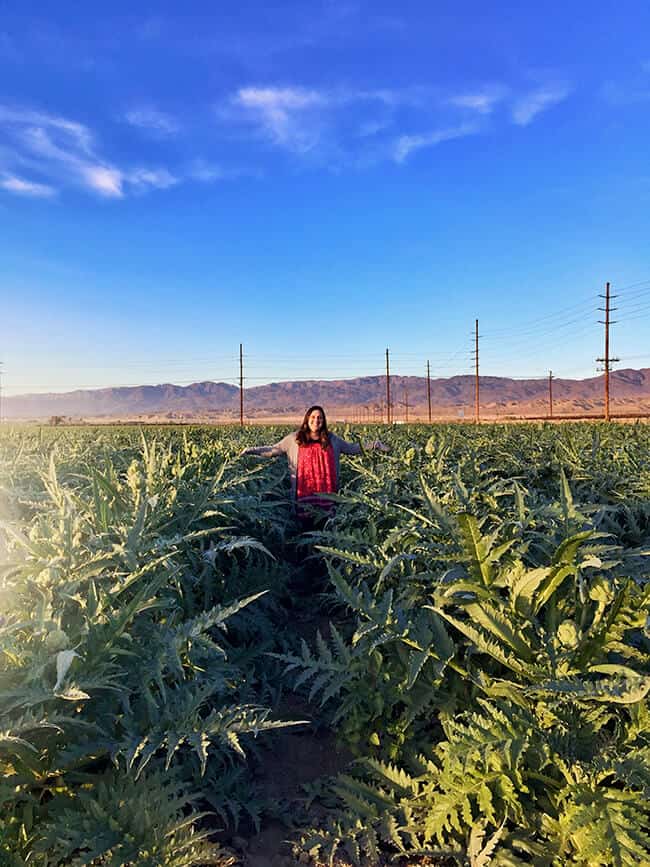 there's no hiding how much i love California. it has the mountains in the north...some even with snow, there's the inland desert area with unique trees and cacti, beautiful sunny weather in SoCal, the most amazing coastline and the central valley filled with orchards and rolling hills. i believe that California is one of the most unique states in the U.S. it has unique landmarks, diverse geography and one-of-a-kind weather patterns....i love living here so much. which brings me to mention California's produce. you might not realize this, but California grows most of the produce for the entire country. i recently had the opportunity to tour some of the California farms located in the Imperial and Coachella Valleys, and was once again blown away by the extraordinary abilities of our state.

with the beginning of the New Year, many of us have made resolutions to eat better and healthier. this probably includes eating more fruits and vegetables. did you know that California is the only state that can grow a lot of the produce we eat ALL year long?!!! it's pretty amazing. California has pockets of land with unique climates that are perfect for growing produce for our country. California's Imperial and Coachella Valley's are so unique...they are one of two places on Earth that has a mediterranean climate. let me share a little bit about what i experienced in these special valleys.

Farm Tour of the Imperial and Coachella Valleys

to cut down on travel time, we took a small chartered plane from San Diego to the Imperial Valley. 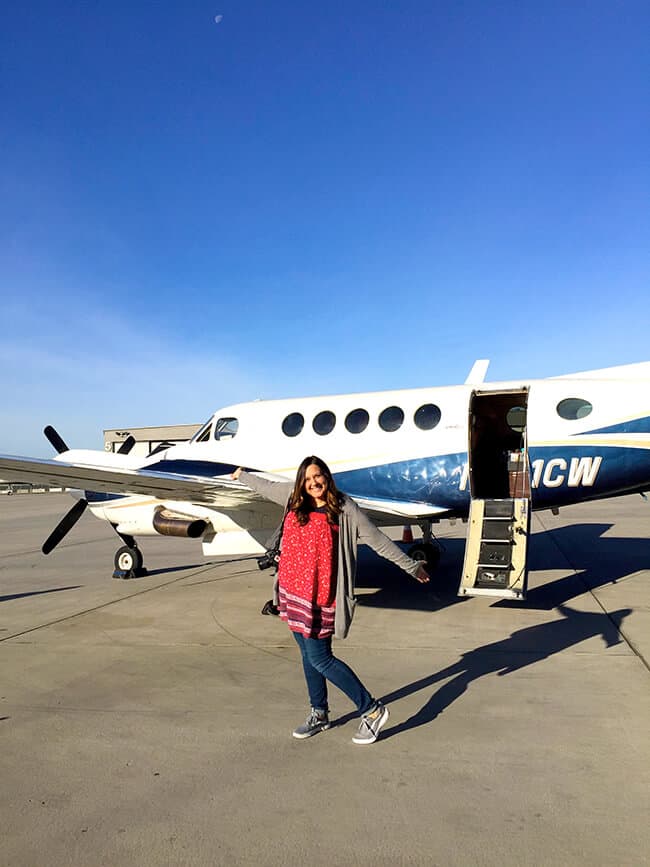 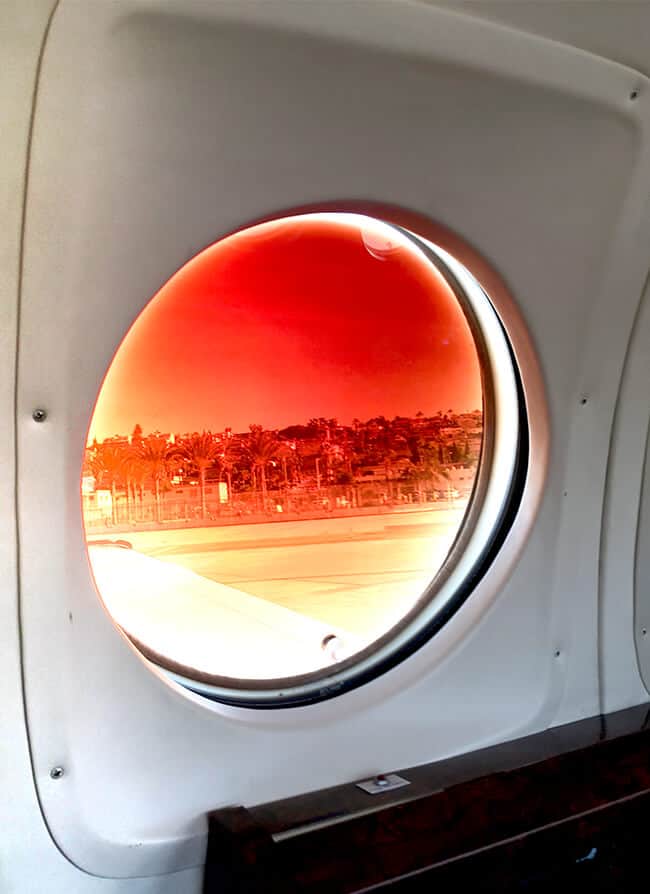 the flight was short, only thirty minutes. if you aren't familiar with where the Imperial Valley is located, it's in southeastern Southern California, largely centered on the city of El Centro. it's just north of the Mexican border, slightly southeast of Palm Springs, laying just south of the Salton Sea. as we flew into the valley, i was impressed to see the terrain change from brown desert sands to rows and rows of lush green farmland. what is this place i thought? how is it possible to grow such wonderful produce in the middle of the California desert. 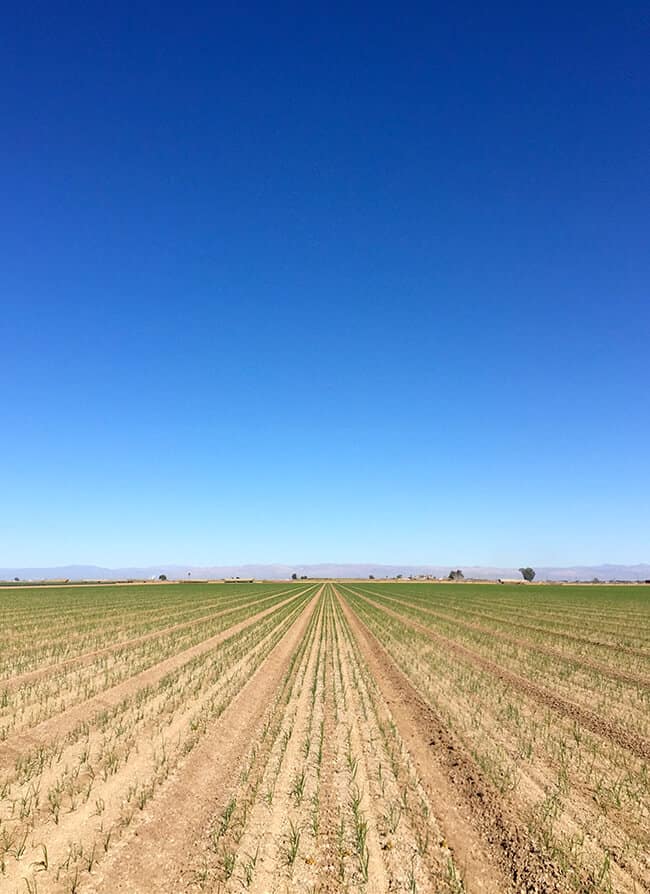 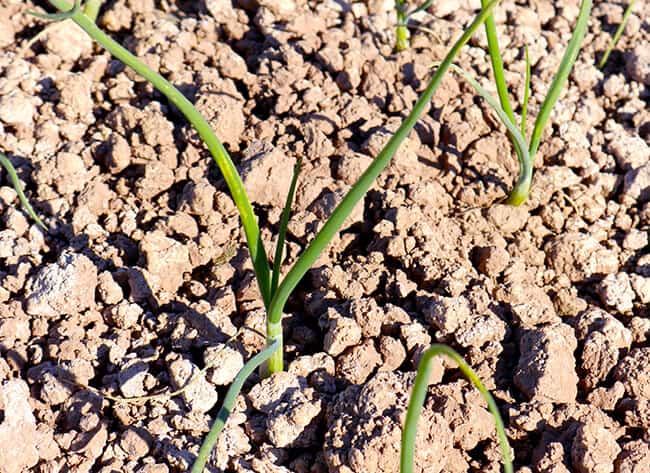 the answer is – the Colorado River. the Imperial Valley is literally below sea level. the nearby Salton Sea was created by a flood of channeled water from the Colorado river into the Imperial Valley basin in the early 1900’s. the valley is bordered by sand dunes and mountains, and the Salton Sea lies within the borders. it is fed by irrigation drainage from farms served by the Colorado River – which is what makes it possible for farmers to grow produce in this desert oasis. i learned a lot of this information from Marion Champion, of the Imperial Irrigation District, and found it very interesting.

our first stop in El Centro was at Jack Brothers, one of the Imperial Valley farms. it was very interesting to talk to the farmers and learn how they farm in the Imperial Valley. the crops looked fantastic, and we were able to first hand how crops were harvested. every farmer has their specialty in produce the like to grow, some grow organic, some share fields, and they all work together as a big community. 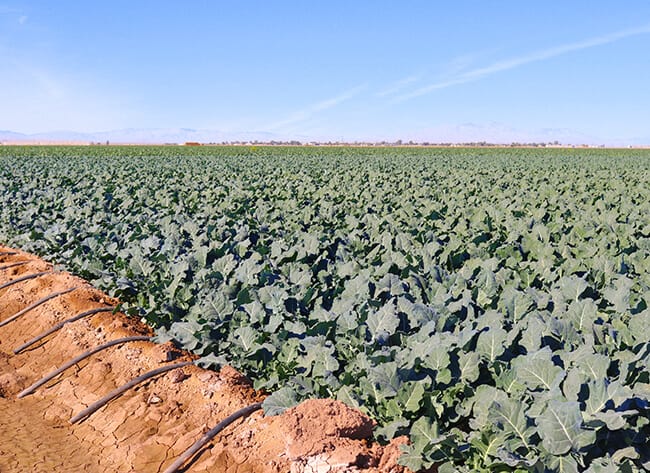 we learned how they farmed using irrigation from the Colorado River. aqueduct channels help bring water from the river to the fields. the farmers have gotten really good at saving and recycling water from their fields. there is good and bad in this. good because they are saving water...but it's a double edge sword, since there is very little water run off into the Salton Sea. now levels in the Salton Sea are dropping. so they are currently trying to figure out how to prevent this from happening. hopefully the politicians and land councils can figure out a way to keep the water coming to the Imperial Valley and also conserve water in the Salton Sea. this is really important. 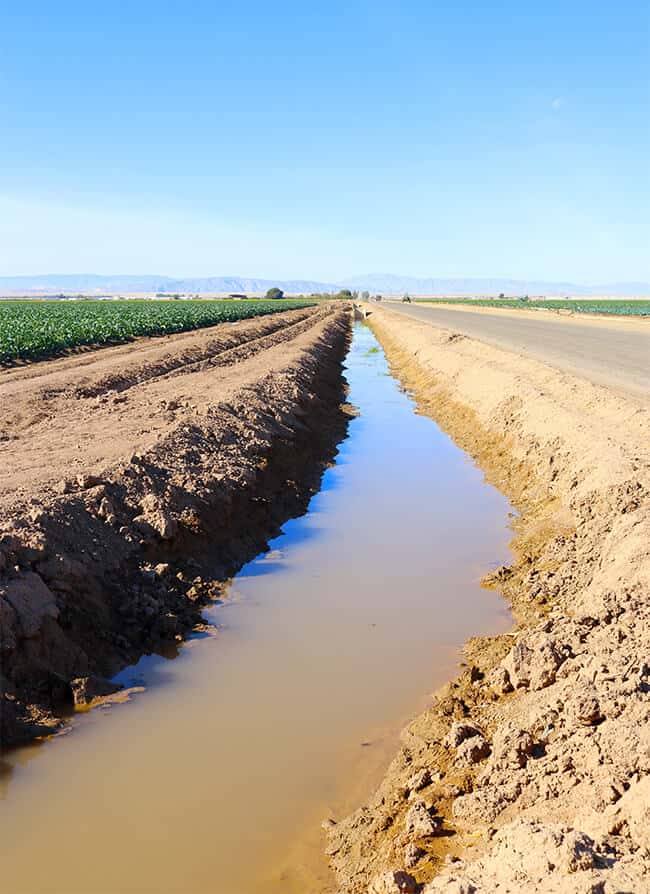 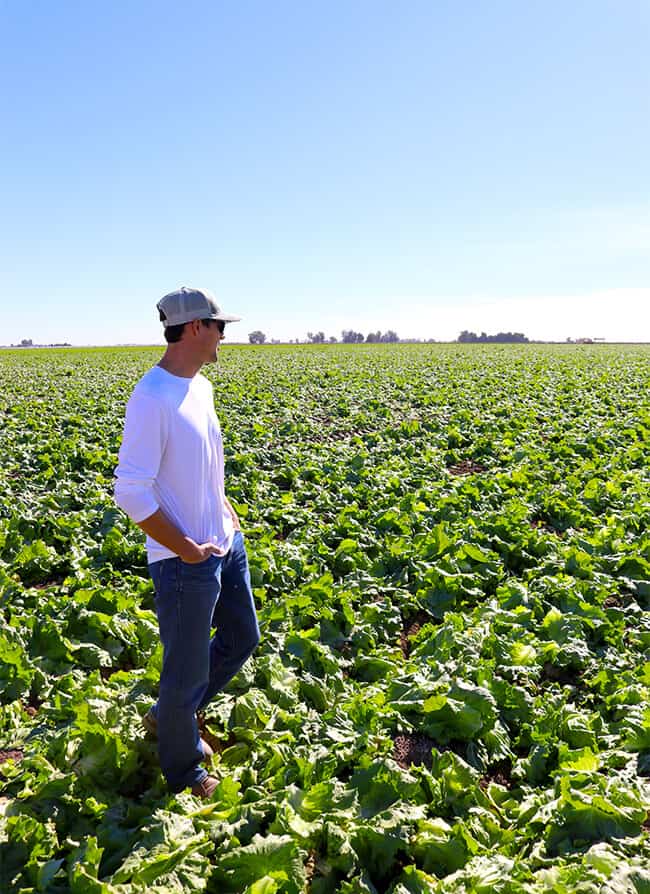 many of the farms are family owned and passed down from generation to generation. this was the case for the next farm we visited, Lawrence Cox Ranches. 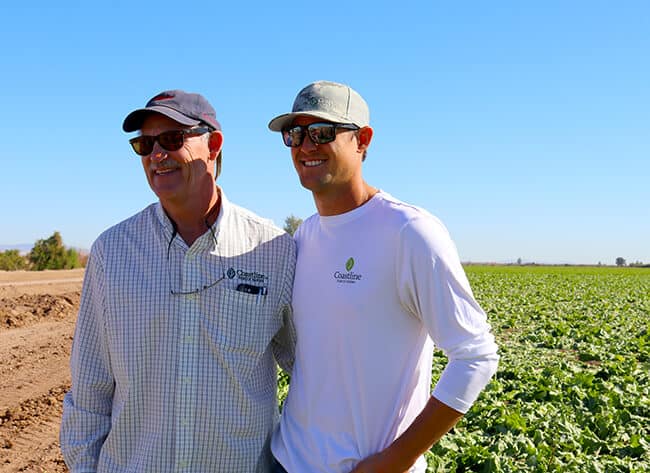 they grow a lot of the produce that we find in our grocery stores and restaurants. one of my favorites was the broccoli. it was so fresh and yummy eating it right out of the field. 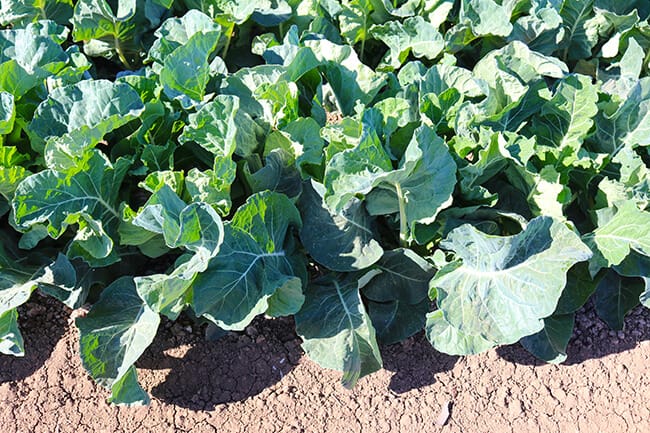 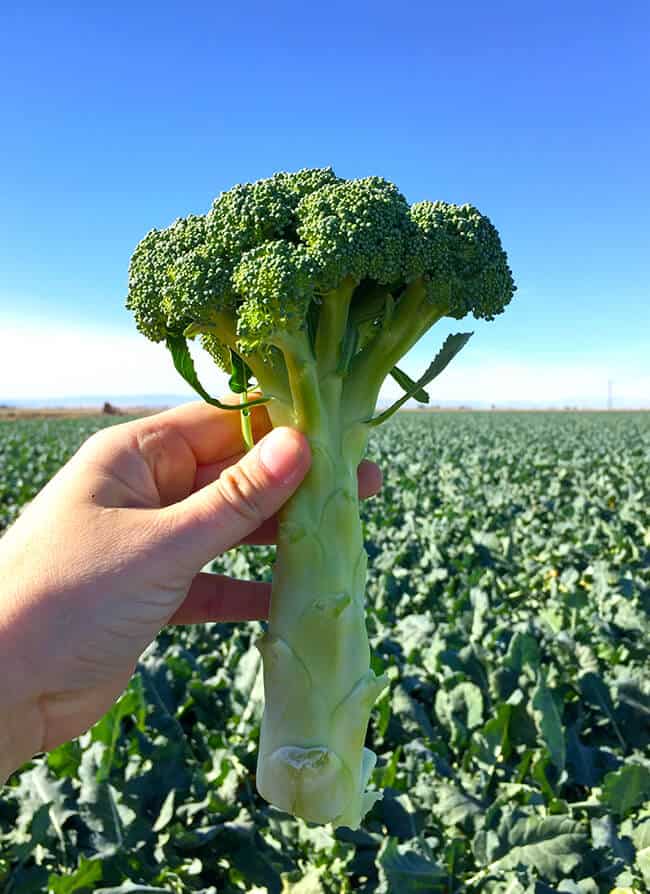 we also got to see harvesting in progress. check it out....these workers are harvesting lettuce that will be distributed at Wendy's around the country. 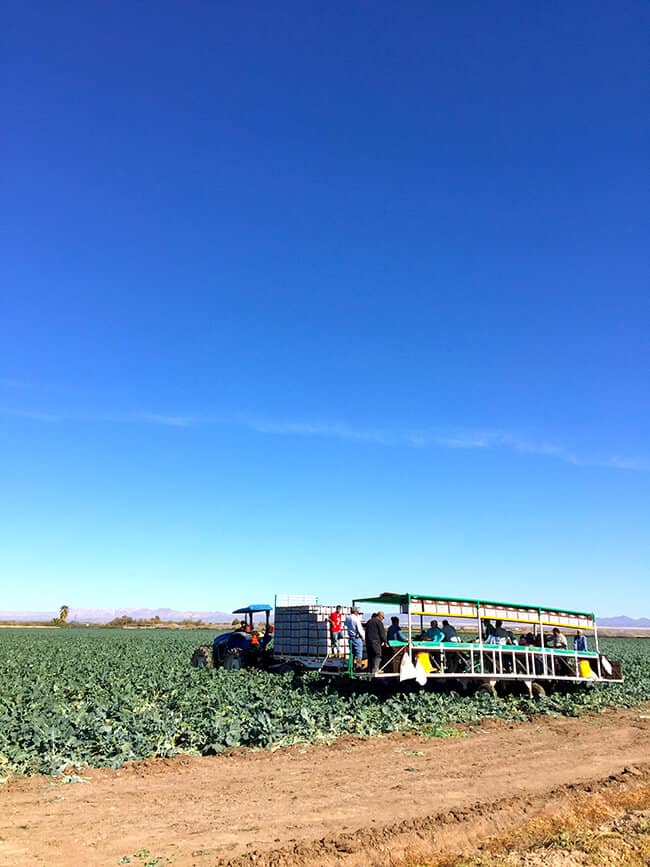 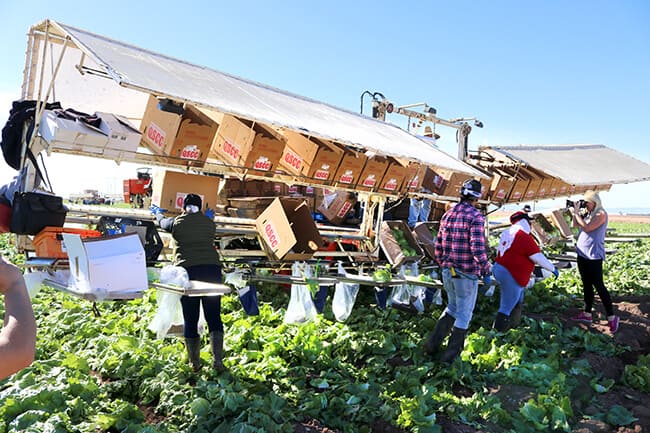 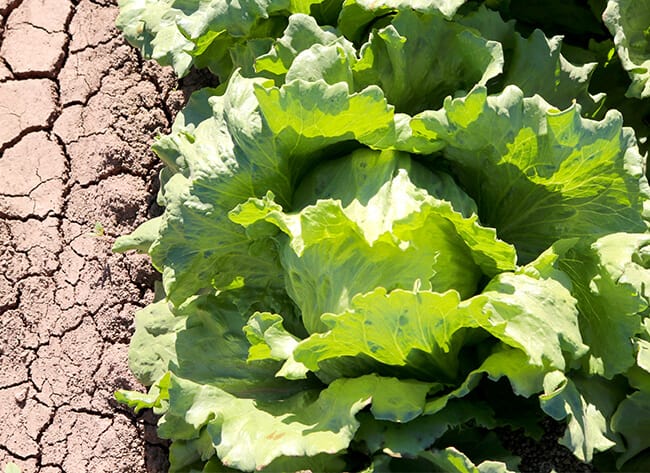 next, it was time to head north about 60 miles to the Coachella Valley to visit a couple more farms. an hour later, we arrived at Hadley corporate Headquarters, where we met with Albert Keck. Hadley's grows some of the best dates. i remember visiting Hadley's when i was little...we always got to get date shakes, dried fruits and nuts. 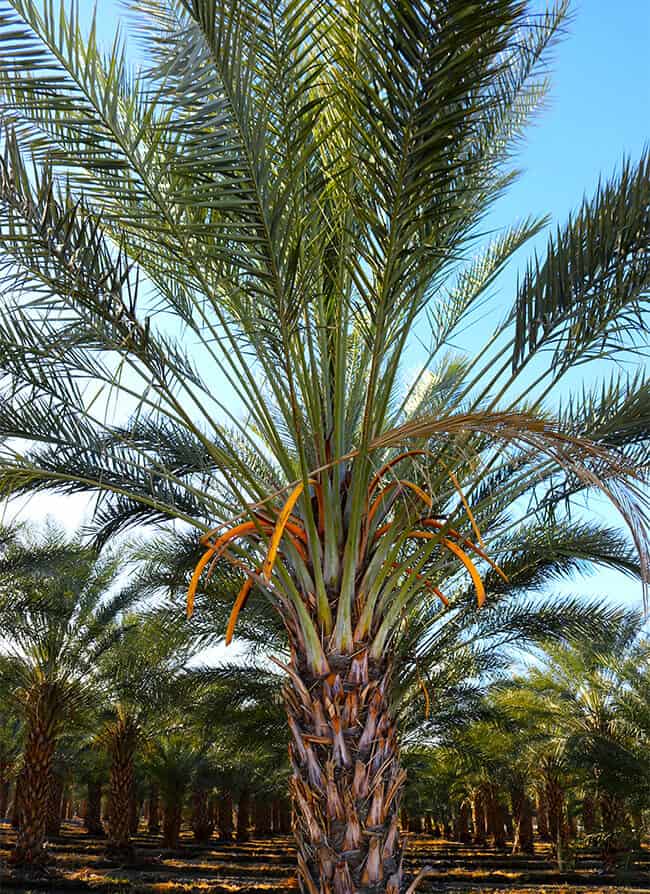 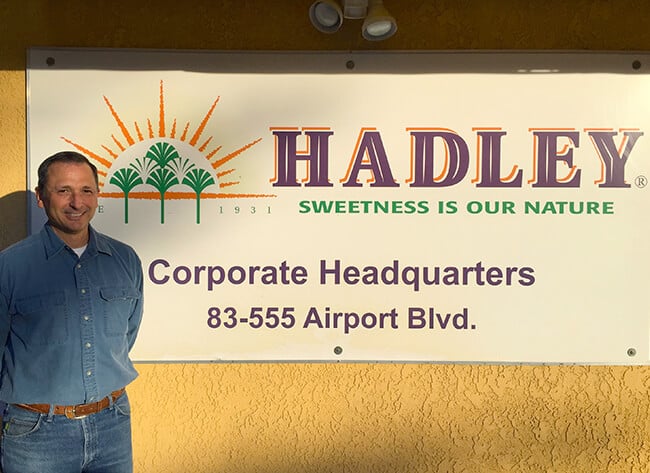 it was harvesting week at Hadley's, so we got to see them packaging the dates for shipment, and talked about how they are grown, harvested and about the workers who make it all happen. it was great to learn that these workers love working at Hadley so much that they stay there many many years. the work is hard, but the pay is much higher than the norm. 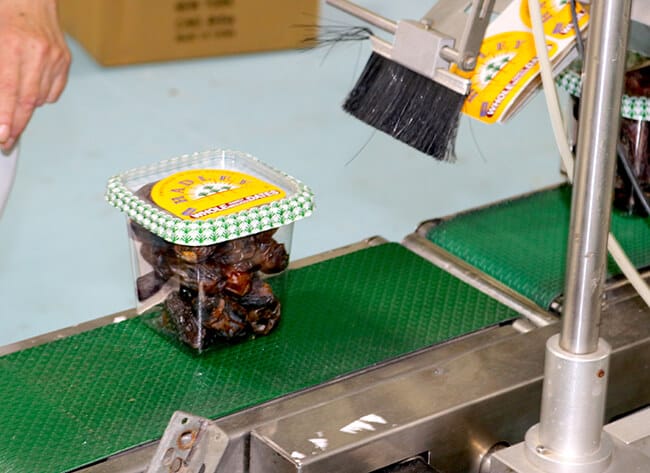 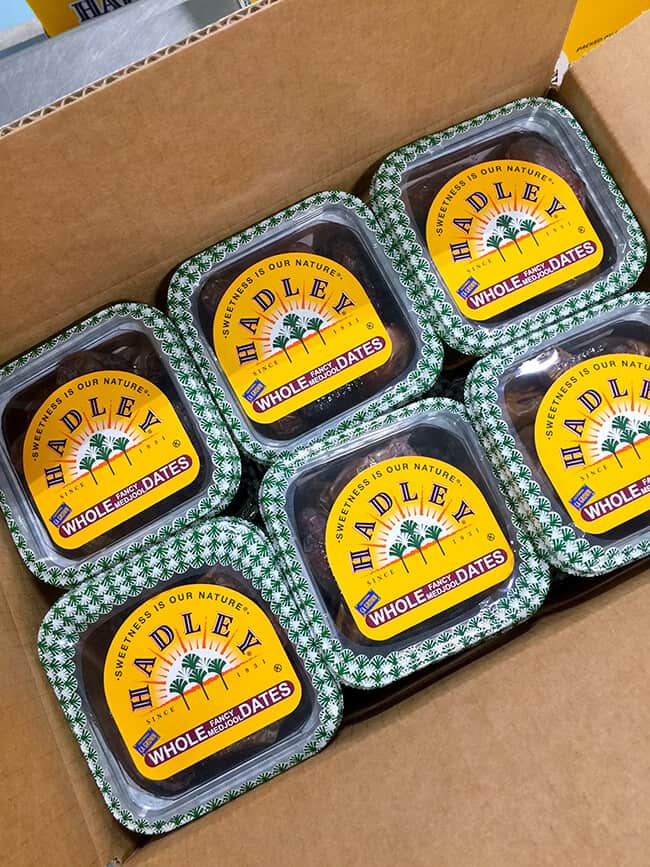 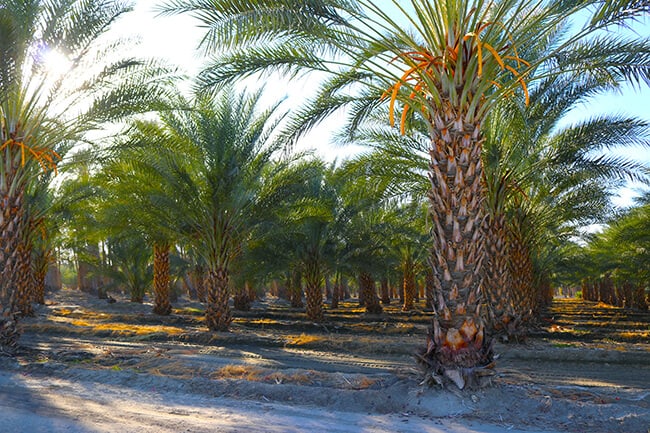 the best part of the tour...we got to try some dates. yum yum! it was really awesome to learn about the date trees and how they only will survive and produce in a climate such as Coachella Valley's. next time you are in Palm Springs, stop by and have a date shake.

our final stop was at Desert Mist Farms. we met with Jeff Percy while we enjoyed the view. rows and rows of produce. artichokes, peppers, blueberries, brussels sprouts and more. 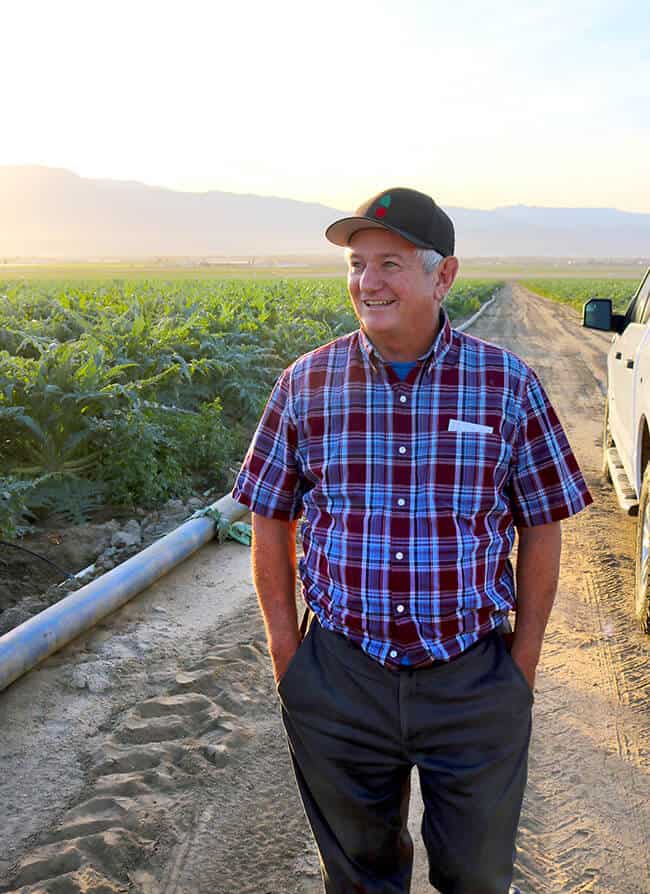 i learned that in order to pick a good artichoke, you want it to be more tall than wide. the bigger the petals and the less there are from top to bottom, the more meat you get it. the petals should also be tight together, that means it was freshly picked. if you squeeze it, you may hear a squeaky sound. the best way to eat them is to cut off the top inch of the petals and to steam them for 20 minutes. now all i want to do is make some artichokes! 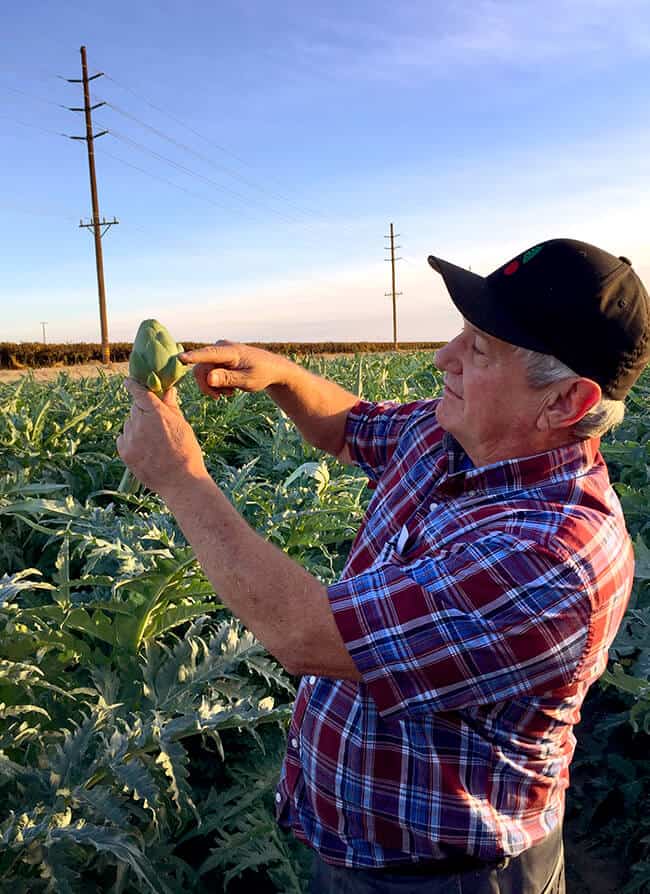 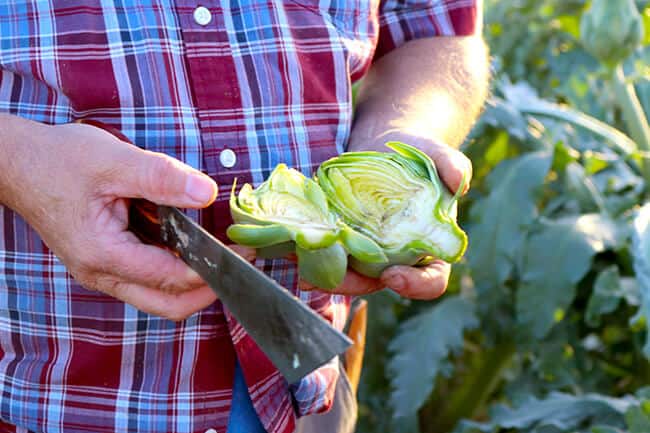 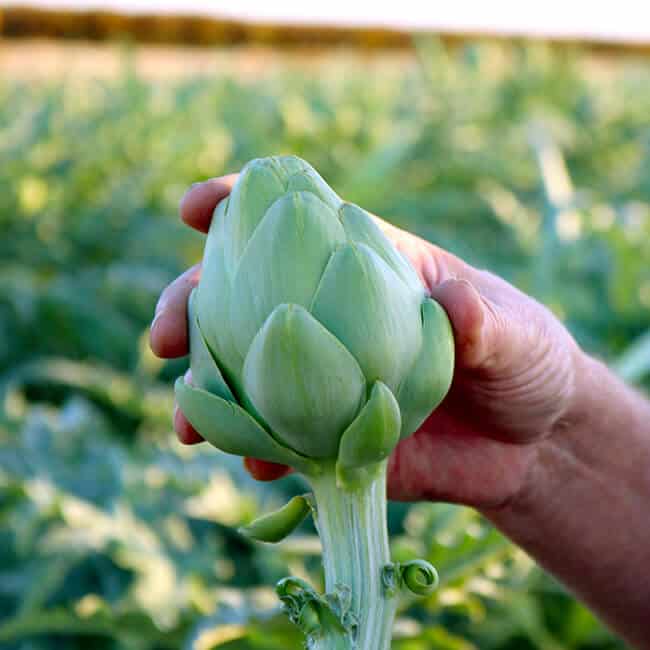 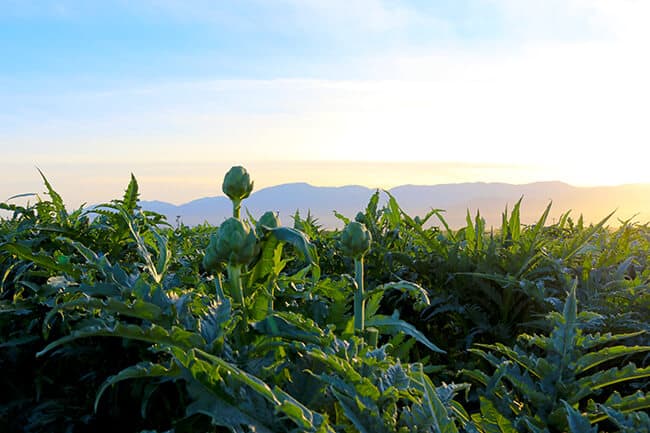 farmers are very proud of their produce....and they should be. 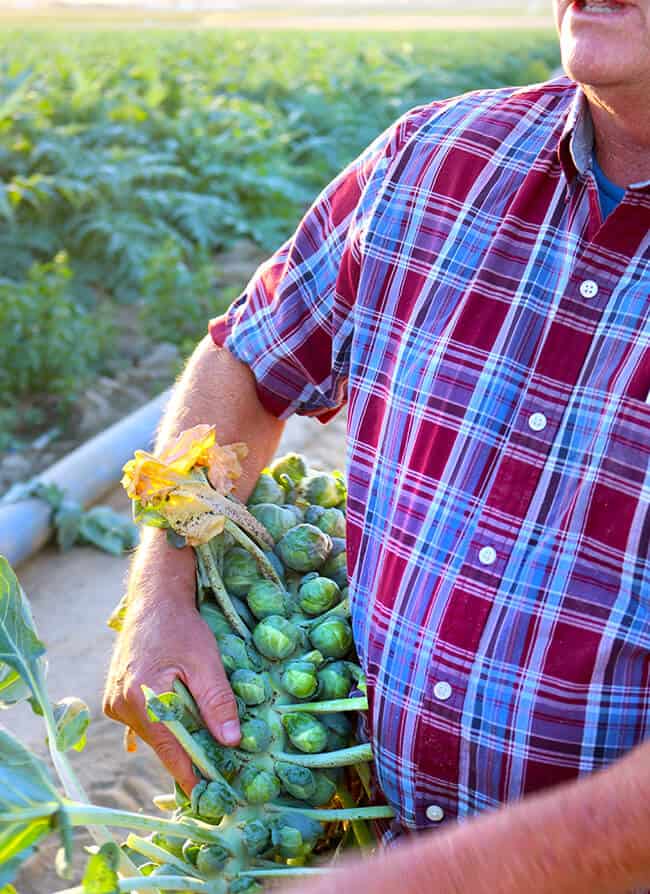 Desert Mist Farms is part of Ocean Mist Farms'. you probably have come accross their produce in your local grocery store. be sure to try out their Season & Steam line of fresh vegetables if you see them. they make meal preparation easy peasy. and if you would like to read a little more about Ocean Mist Farms’ Natural Resource & Sustainability initiatives, head over to their website.

what an awesome experience to get to go on this special Farm Water Tour. it really is amazing what these farmers do and how they are able to farm in California. we really live in a magical place...i'm so glad to call California home.

Wanna learn more about California farming? Chelsea from Someday I'll Learn was on the tour with me and wrote a great post about here experience. check it out – 7 Things I've Learned from Farmers