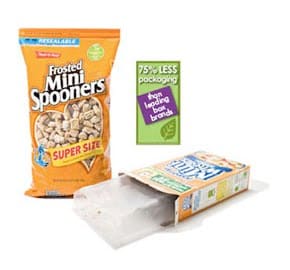 do you remember my previous post about the tantrums my oldest was having at dinnertime? thanks to Faye, it is still working like a charm. but as i mentioned in that post, my problems switched to breakfast time (i knew it was too good to be true). but my husband was able to put two and two together.

i didn't realize that now that the dinner tantrums subsided the breakfast ones began. so he decided to take my oldest grocery shopping to pick out some cereal, and figured out what the problem was. my hubbie found that my son didn't like that i have been buying cereal in bags.

because i have been trying to be on a better budget and saw that the cereal in bags are significantly cheaper than big-brand boxed cereal. and i used to think that they didn't taste as good, until i recently tried them. i actually think they taste better! and for around $3 you get 28 oz. of cereal opposed to about 10 oz. of the boxed.
so, my son got a little lesson in comparison shopping thanks to my hubbie. he now knows that the cereal in bags cost only $.10 an oz. and the boxed cereal costs $ .37 an oz. wow...even i didn't realized there was such a savings. and i guess that is all it took to make my breakfast tantrums disappear. tah dah!

btw, Earth Day is just around the corner, and is a reminder that by buying cereal in bags you are helping to reduce waste. the leading box brand cereals come in a bag inside of a box. (isn't that a little redundant?) but bag cereals come with 75% less packaging to dispose of. good for you and good for the environment. recycling helps, but only 44% of the paper, corrugate and paperboard packaging consumed annually still ends up in landfills. if all cereal came in bags alone, instead of boxes with bags, U.S. households could reduce their paperboard use by 375 million pounds per year.