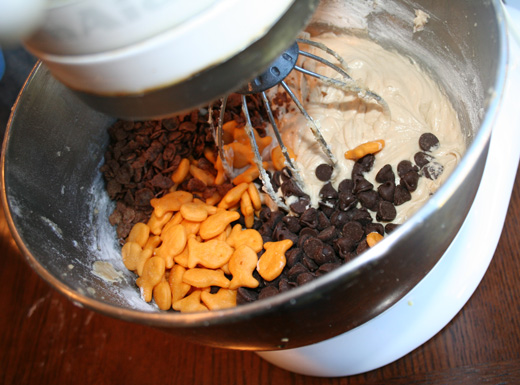 so it's been a crazy week. crazy week = little time to blog. lots of work (sometimes it is very hard to be a work at home mom). and it has been a week of firsts (i'll explain later). anyways, the blog awards were monday night (i'll share that craziness later). no, sandy toes and popsicles didn't win....but thanks to all of you who voted!!!! it was a fun party and i am just thrilled to have been nominated.

so today, i had to take some time out and spend with my little Kyle. we played a few games...with his rules....so he won everytime. and we made dump cookies.
they were gross.
don't make them.
i should've known that cookies made with cocoa pebbles, goldfish crackers & chocolates chips would not be good.
you know what else it not good? sitting here at the computer after a long day....and baby spit-up all over my shirt. so i must say goodnight! gotta close the house for the night, shower and off to bed.

i am an artist and graphic designer. i own the invitation company Jill Parkin Designs. i work from home…when the kids are sleeping….or playing with Legos. i let my kids get messy. when they are happy, i am happy. i believe in living in the moment, and that the best things in life are free. Read More…

How to
Make a
Coca Cola
Reindeer
CLICK HERE